Cons: Can't find any yet

I am completely impressed with this product. I was a little skeptical when my daycare offered us some samples about a month ago, but when my daughter got sick (coughy/snotty) over this past weekend, I pulled it out to give it a try. What I didn't know, before we opened it, was that it's HOMEOPATHIC! How great is that!? I mean, when you *have* to give your kids drugs, ever, you just hope that they don't have side effects that will make them crazy lunatics - but homeopathic remedies are formulated specifically not to cause any weird side effects, and are fairly safe to give to your kids (following the guidelines, of course).
Anyway, we tried it on our daughter, and it has been the only thing to dry up her runny nose and stop her ceaseless allergy-cough (caused, of course, by the runny nose!) - except for larger-than-I-like-to-give doses of Benadryl... but the Benadryl wears off (and I can't give her another dose for several hours), so this stuff fills the daytime hours quite nicely.
As I type, my baby girl has been napping for over two hours - I gave her a dose *while* she was sleeping from a dropper, and she stopped coughing about 15 minutes later... and hasn't made a peep since.
I highly recommend this product.
And as soon as my daughter is awake, we're trotting over to our closest retailer to purchase more!
Thanks, Hyland's! Glad we got samples to try, or we honestly might not have ever given it a go.
We really appreciate it!

Miss Olive Grace was born on January 28, 2011!
Hooray!
Now, we're what many fire fighters would call "fully-involved" in raising two sweet-natured children. And doing lots of heart-training with our toddler. Not to mention potty training. :)

I keep meaning to make posts - I just wish I had a better phone to make them with... I'd be posting at least once a day! Alas...

Ok - so I'm only just listing a couple here, but I'll keep labeling each post, and maybe it will grow...
Maybe.
:)

Let's Draw With Chalk! (books says 3+, I say 2+).
Cars, Out for a Spin (magnetic book)
TAG reader, with Cars book. it's a winner for sure.
Kids Go! by They Might be Giants - has a great DVD that comes with it, and Dax LOVES to "move like a monkey"

(This is really just a side note for me... since I haven't updated a baby book in like 18 months) :)
Movies/TV:
Cars (duh.) :)
Nemo
Bakyardigans (Mars episode is the most played in our household)
Yo Gabba Gabba, still (Dax has loved this since he was just over a year old, I think)
Posted by Lisa at 2:46 PM No comments:

New recipe! Tried it tonight, and it was pretty successful. Dax mostly ate the noodles... but at least there was some broth in it, so I know he got some protein even when he wasn't eating very much chicken...
:)
Here's the recipe

I was amazed at how much this made, and what a big part the walnuts played... they're a must.

Oh! And I used a 1 pound bag of steamer broccoli - so I didn't have to steam the broccoli so long in the pot (don't steam it the full amount of time in the bag, and it'll turn out really good... unless you like it crunchy, in which case, just drop a 1 pound bag of frozen broccoli in the skillet - steamer, or otherwise).

Now, after it's been eaten, and I'm putting it away, I'm noticing how "dingy" the garlic and lemon made the pasta... but it's even tastier, now that the skillet's been sitting for a while... I say leave it to sit and "stew" as long as you can before serving - maybe add an extra half a cup of broth for that too. Who cares if it's "dingy" looking. It was pretty darn tasty.
:)
Posted by Lisa at 5:45 PM No comments:

Brown meat with Italian seasoning and set aside.

Spray the cooker with Pam.
Mix water with jars of spaghetti sauce
Pour a bit of sauce on the bottom.
Layer noodles, meat, mushrooms, sauce, one tub of ricotta, and mozzarrella. Repeat one more time, and then just layer noodles, some meat, mushrooms and sauce for top.

Turn on HIGH for one hour.
Turn down to LOW for five hours.
(I used these times with my crockpot that has HOURS on it, not heat levels... and scorched the bottom... so if you have one like mine, I'd suggest the lowest HIGH - or 6 Hr setting -  for 1 hour or less, and then the lowest LOW - or 10 Hr setting - for as long as you need it)

I am such a blabber mouth when I post, I've decided to make this one short, and keep on making them short!
:)
Dax has been at his "new school" now since the last week of August, and has really settled in. I haven't been laid off from my job, but will have no work til probably March next year - which makes the budget pretty tight these days - so we're having to cut back on his school hours. Yesterday was his first half-day at school. And he managed pretty well when we got home and took a nap. But in the afternoon, he kept talking about his friends, and playing on the playground... :( Made me sad - he obviously missed them. He had a little bit of trouble falling asleep for his nap, too - probably so used to the routine at school, and everyone lying on their own nap mats...

But his teacher was showing me the other day how he can spell his name with the letter magnets they have in the classroom... and he spelled "mat," "pat," and "cat" while he was showing me. I'm amazed.

I also got to spend some time with his classmates last Friday for their Halloween party - SO glad I did. I've been harboring this angst against a certain child there, who took a bite out of Dax's arm the first month he was there... But when I got to spend time with him, I realized that he was really a very sweet, gentle boy. He has older brothers, and I'm sure that when he was threatened (Dax wanted a toy he had, I think), his only defense, most likely, learned in his household of older brothers, was to bite... I didn't blame him - I just harbored some bad feelings about the whole situation (ever since). But I was really taught a good lesson when I got to be there with them for a couple of hours.
Thank you, God, for showing me humbleness, and teaching me that all your children are precious in your sight.
:)

What else - Halloween was a hoot! I think Dax may actually remember this Halloween - but probably just because we did it for 3 days in a row! :) We had Halloween party at school trick-or-treating, we had Mansfield trick-or-treating, and then we had Roanoke trick-or-treating with Mooma and Bapa. Lots of candy, for sure, and lots of "trick-or-treating" practice. Dax even said "thank you" after he got candy... what a fun experience! :)
Posted by Lisa at 7:48 AM No comments:

We've been working on potty training for months - a year, maybe. It's been a slow process... and I won't bore you, but we warmed up to the potty (sitting on it, flushing it, etc); we ran around naked nearly all summer (no diaper, means you have to figure out something else to do).
Dax was peepee potty trained fairly quickly - inasmuch as he knew how to go pee pee on the potty, and would do it when he had no drawers on. And that's awesome. And it happened like... a year ago, or something - I can't remember now... but he was a quick learner.

BUT if he had a diaper on, he was sure not going to let anyone know he had to go - he'd just use his diaper. And really, that's fine too. A mom forgets how great it is to go the grocery store, and not have any pitstops until you get home. You just forget about how, really, great it is that you don't have to go to a public bathroom if YOU don't have to... It's pretty convenient, a diaper.

Anyway, so just over the summer, I tried really really hard to reinforce the potty... we tried stickers (which are, actually helpful, if your child likes stickers) and charts (the charts mean nothing, but they hold a lot of stickers, when they don't make it on your kid's shirt), and finally fell victim to the M&Ms... 1 for pee pee (sometimes 2, when we had to backtrack a little in training), and up to 4 (!) for poo poo.

There's not a lot of stuff Dax won't do for an M&M. The kid LOVES chocolate. I had to get him where it... got him. You know? And it seemed to work. But he was still pretty comfortable in his diaper.

When "new school" started at the end of August, I realized, it was now or never. They told me that they would help me (which was great! the "old school" never seemed to remember that I was trying and so our efforts were basically wasted). So after two weeks at his new school... we did it.

It was Labor-Day Weekend, and I have him home with me on Fridays, anyway - so I had him from Friday, til Tuesday... and... I took off his diaper. ALL weekend! (not for naps and night-night - don't get ahead of yourself!) ;)

And you know what? The kid did GREAT! I was totally impressed!
We had an accident or two - and actually, they were at Honey's house, when I didn't have a good eye on him, but all-in-all, he was stellar.

Church was another matter... and I know that childcare has a lot on their plate when dealing with all the little ones - especially if they're potty training... it's rough... so  we sort of backtracked a little there. But NO big deal. We just kept plodding along.

And then today. A shining moment. Actually, several.

We went to play at Vanessa and Ethan's (from playgroup; Vanessa has a brand new baby girl, Addi - so precious). We took them food, and played with some new toys, and watched some movies. And not only did Dax pee pee (twice) - he poo poo'd! He called me from the bathroom, with his pants already around his ankles - and asked for his Elmo potty! Amazing! Thank the Lord!

THEN - we got home and Dax went down for a nap a little after 12:30. He woke up about an hour later yelling for me - he had to go pee pee! He even had a diaper on! "Want to go pee pee in the potty, Mommy!" So I dropped his diaper, and plopped his buns on the potty seat, and he went tinkle... and then... HE WENT BACK TO SLEEP!

I am just floored. And I tell you what - I had absolutely nothing to do with it - but I am SO PROUD of him! And thankful for the grace and patience God gave throughout the process.
:)

What I learned is that every child is different. There are a ton of methods out there, and I guarantee that your child will not fit any one of them perfectly... :)
Ok - up from nap, and time for snacks.
:)
-L.
Posted by Lisa at 1:59 PM No comments: 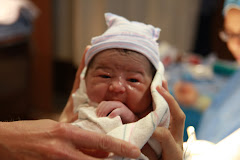 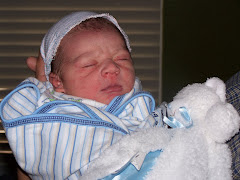